Not long before Thanksgiving, one of the Husband’s cousins contacted me about pulling together a party for her mother’s 60th birthday.  Being the party lovin’ girl I am, I jumped at the opportunity.  Not onlyw as I excited just to put together a party, but I was thrilled to be involved in celebrating such a kind and loving person.  The hostess officially requested a sit-down tea for ten.  Because the party was a mere week before Christmas, she requested that the color scheme incorporate red and green to coordinate with he Christmas decorations that would be up in the house.

Based on these elements, I pulled together a simple inspiration board for our consult:

Based on our discussions, this was the invitation chosen from Westwind Days: 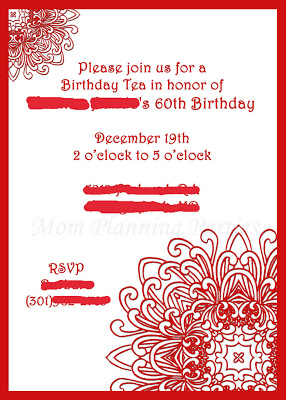 In order to break up the Christmassy feel of red and green-and to reflect the guest of honor’s very sweet and girly personality-I recommended incorporating pink into the color scheme.  At first, we discussed it as splashes of pink among the reds and greens; but as things started to pull together, the final colors turned out more red and pink with splashes of lime green. 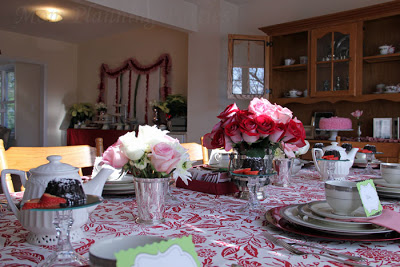 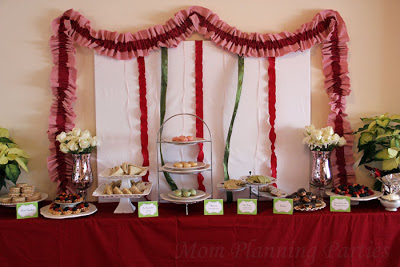 I have to admit-I loved it.  It actually turned out to be a very versatile color scheme which could be translated to any other girly party, Christmas party, or even Valentine’s Day!

The hostess requested a very South American tea, with lots of sweet treats.  The menu included mini fruit tartlets and mini eclairs from The Cakery, a bakery known to have some of the best eclairs in the area. 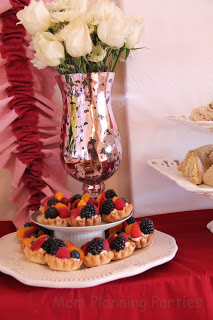 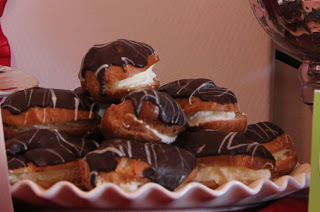 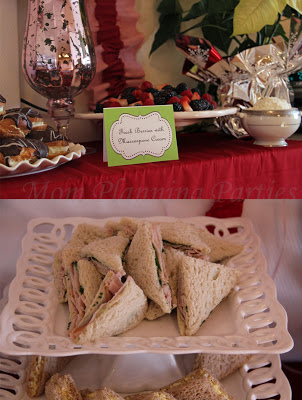 From Patisserie Poupon in Baltimore, I purchased a variety of divine macarons. (The pistachio macarons were particularly amazing!)

The hostess also requested that I incorporate Alfajores (pronounced al-fah-hor-ehs), a traditional Latin American cookie made with a dulce de leche filling.  As luck would have it, I was able to find Mel Mellis::Sweet Treats on Etsy, who made some delectable Alfajores and the cutest little tea infused loaves.  The loaves were great thinly sliced for this event, but they would also make the perfect sized favor for another tea party. 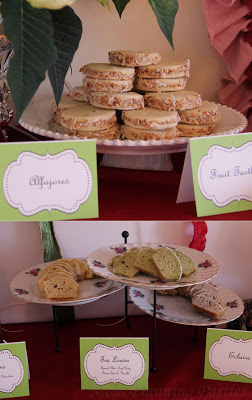 I had come across some inexpensive natural burlap while shopping one day-and inspired by this post at Pepper Design Blog, and the amazing ruffle garlands at Hank and Hunt-I created my own version of the ruffle garland.  I cut the muslin into two different width strips, hand dyed the strips, and then hand sewed them to create a ‘seamless’ ruffle garland.  My husband would probably not like hearing this; but I love them so much, that I would totally do it all over again! 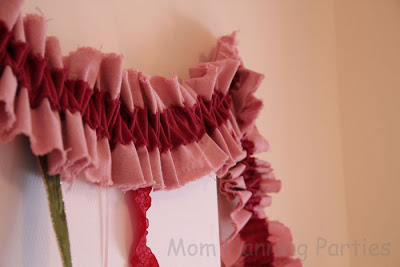 In the dining room, we had the table set for all ten invitees.  The hostess’ china hutch displayed the favors, more ruffle garland, pictures of the guest of honor and the beautiful ruffle cake by Creative Confectioners. 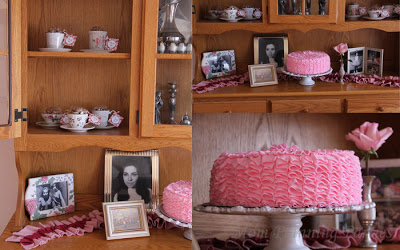 The favors were mismatched tea cups and saucers found at Goodwill, filled with candied pecans and tied with a red damask “Thank You” tag from The TomKat Studio. 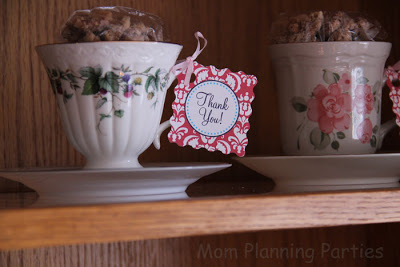 The TomKat Studio graciously customized their Fairy Garden fancy labels for me; which were used as place cards and as buffet cards. 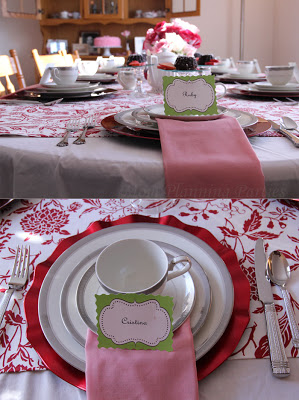 Individual tea bags were displayed in an inexpensive jewelry tray from Marshalls’s that was covered with leftover red burlap. 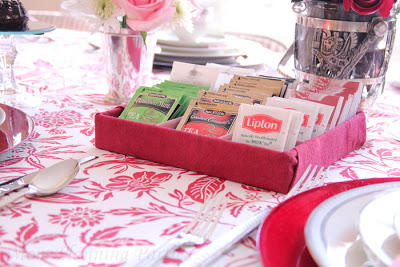 What still puts me in shock is that-with the exception of the inspiration boards and general concepts-the entire party was put together in a week and a half.  I won’t lie, it was rough; but it’s amazing what can be done in such a short time!

—But wait!  The pictures don’t end there.  A full album of these photos and more are available on the Pampers, Play Dates & Parties Facebook Fan page!

*At the request of the hostess, all pictures of the guests have been retained for privacy purposes. 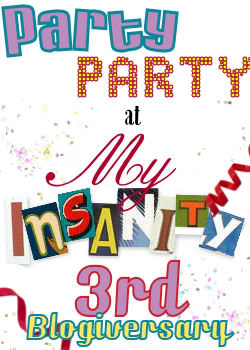 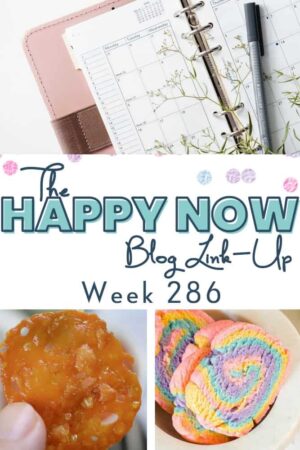